Electrospinning mechanism: the basics of the nanofibre creation process

This article will give you an introduction to the basics of the electrospinning mechanism and show you what this innovative process is all about.

Electrospinning mechanism is designed to produce small-diameter fibres over a modest surface area, with relatively simple and inexpensive equipment required.

Electrospinning uses forces produced by a high electric field to achieve the formation of polymer fibres of nanoscale diameters. The electrospinning process begins when electrical forces attract the surface of a polymer solution to form an electrically charged jet. When the jet dries, evaporates or solidifies, electrically charged fibres, called nanofibres (or nanofilaments), are obtained. These nanofibres are collected on collectors of different geometry, the latter chosen according to the desired result. 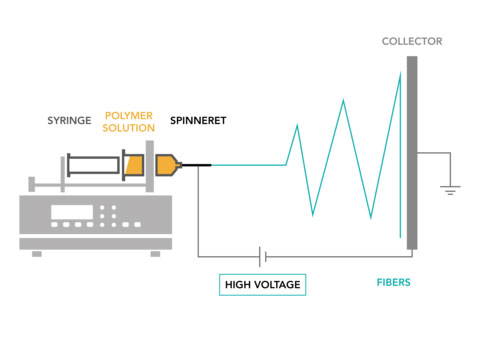 The electrospinning process is mainly driven by electrostatic forces acting on the surface of a liquid polymer solution or a polymer melt, and this interaction results in the production of fibres. In conventional spinning, the fibre is also subject to:

When free charges in the liquid polymer (usually positive ions) move in response to the electric field, they rapidly transfer a force to the polymer liquid. A strong electric field is then applied to the solution, which generates an electrostatic force greater than the above forces, and the result is the formation of a jet that moves towards the opposite electrode.

A stable jet has four regions:

In the last region, the formed fibres are collected on a collector that can have the geometric shapes of:

It is possible to directly deposit the electrospun nanofibres on objects of different shapes to obtain three-dimensional nanofibre substrates of controlled shape and size. Various types of electrospun fibre scaffolds aligned or randomly oriented can also be manually processed to obtain the desired geometry.

During the process, the material solution is extruded from the spinneret forming a small droplet; high voltage is required to transfer charge with a certain polarity to the surface of the droplet. When the electric field exceeds a critical value, the repulsive electric forces overcome the surface tension forces and the material is accelerated towards the collector (which has opposite polarity) in the form of a fibre.

In this video uploaded by CanalDivulgación we can see the electtrospinning mechanism.

The three phases of the electrospinning mechanism

The Electrospinning process can be divided into three main phases:

The electrospinning mechanism is the future because of its wide range of applications.

Why is it important to work in an electrospinning chamber?
May 14, 2020